Spousal Assault is a difficult topic for most people, especially in New York City. Prosecutors, police and the New York City courts worry about letting habitual offenders slip through the cracks of the judicial system. This is what leads to any minor incidences or misunderstandings to be treated with the utmost seriousness. If you are charged with a domestic violence charge getting a New York City spousal assault attorney is going to be necessary if you do not want allegations especially if they are false allegations, to become a permanent scar on your record. 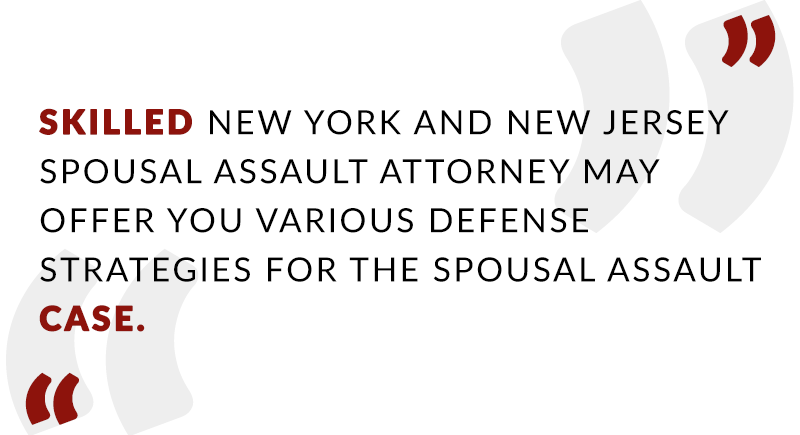 The crime is considered as a spousal or family assault if the offender injured any of his or her family members, or someone he or she is in a dating relationship with. A simple call to the police caused by a suspicion of domestic violence during a spouse quarrel may end in extremely harsh consequences.

In a domestic violence case where you may or may not have a New York City spousal assault attorney, you will more than likely find the odds stacked against you due to the seriousness that the court’s place on such crimes. An order of protection is usually the first line of defense that is used to protect the person who is claiming to be a victim of spousal abuse. Violations of the orders can lead a person to be held in contempt of court and placed in jail for a period of time.

It Is Time to Call Your Spousal Assault Lawyer

Anytime you are accused of domestic assault, you will require a skilled New York spousal assault lawyer who is able to prove your side of the situation and to defend your rights, especially if a case will go to court.

The New York City spousal assault attorneys at the Sharova Law Firm also handle domestic violence disputes that involve child custody issues based on family court directives. Children can become entangled in a dispute simply by not receiving the care or attention from one parent due to a prohibitive nature of a protective order. The court with stipulations provides sometimes visitation rights whether you are the victim or the accused, a New York City spousal assault attorney is useful when submitting motions for child visitation rights, as this situation is very sensitive and the welfare of the child is a chief concern of the courts.

Assault accusation that occurs in a context of spousal violence are even more severe and can possibly lead to even more severe penalties. Addition to time in prison, there is a risk to get a protective or restraining order that disrupts normal life. The spousal assault charge is something that never leaves you because you also get a permanent criminal record to your personal information. That also means losing the right to carry a weapon for the offender.

First-time spousal assault is a Class A misdemeanor, which potentially results in fines up to $4000 and a year in jail. Repeated crime charges mean felony in the third degree and lead to fines up to $10000 and prison period from two to 10 years. Using a weapon or serious bodily injury are factors that can make spousal felony charges aggravated, which is the felony in the second degree. Possible punishment for that are fines up to $10000 and risk to go to prison for two to 20 years.

Top New York Law Firm On Your Side

If you are accused of spousal assault, you should not try to solve it alone. It is necessary to find a seasoned New York spousal assault lawyer who will fight on your side. Domestic violence attorneys at the Law Office of Yelena Sharova P.C. are highly experienced criminal defense lawyers who will professionally represent you during the case.

Skilled New York spousal assault attorney may offer you various defense strategies for the spousal assault case. First of all, it is necessary to analyze all specific circumstances of the case to choose the best one for this particular situation. Some common domestic assault defenses are:

If the force was used only as an answer for another force and you just tried to defend yourself of possible injuries or death, that will be considered as a self-defense. Such defense tactic leads to full dismissal of all charges;

That is similar defense tactic, that says you just tried to protect the third party from bodily injury, serious harm or even a death;

That defense strategy means proving you were falsely accused of domestic assault, for example by an angry spouse. False spousal assault allegations are common issues during complicated divorce process;

Such defense tactic is used if you used force in an aim to protect your valuable property assets. It is important to notice, the force should be proportioned to defense required to simply protect assets.

If you are being accused of spousal assault in New York, the best possible choice for you is to call a highly experienced domestic violence attorney at the Law Office of Yelena Sharova P.C.

Our professional criminal defense lawyer will review all unique details of your case to develop a perfect defense strategy that will result in reducing or total dismissing of all charges.

If you or someone you know is not able to ask for help and is too afraid to call the police or a dedicated hotline for domestic violence, contact the New York City spousal assault attorneys at the Sharova Law Firm for assistance. They have worked with many clients and helped them through some of the most complicated issues a person may face. If you are the accused in a situation that you know to be a revenge ploy, contact the Sharova Law Firm today! They will defend you aggressively and intelligently to prove your innocence.