There may be various reasons to accuse a person of manslaughter, for example:

♦ Cause the death trough recklessness:

That is a wide definition of any involuntary death of a victim because of temerity of the offender;

This definition means lack of premeditating but causing the death of the victim in case of “heat of passion”, for example during sudden quarrel;

Even performed by a licensed medical professionals, assisting in suicide is still illegal;

♦ Murder of an unborn child by injuring a pregnant mother:

Such situations, of course, exclude the mother herself or medical specialists who are licensed to perform abortions.

The Sharova Law Firm has experienced manslaughter New York City lawyers who are capable of helping defend your freedom and protect your rights effectively when it comes to these kinds of charges. They attack from every possible angle and they do this with the help of an elite criminal defense investigative unit that helps to procure evidence that may have been excluded from the original police report that may help support your innocence. 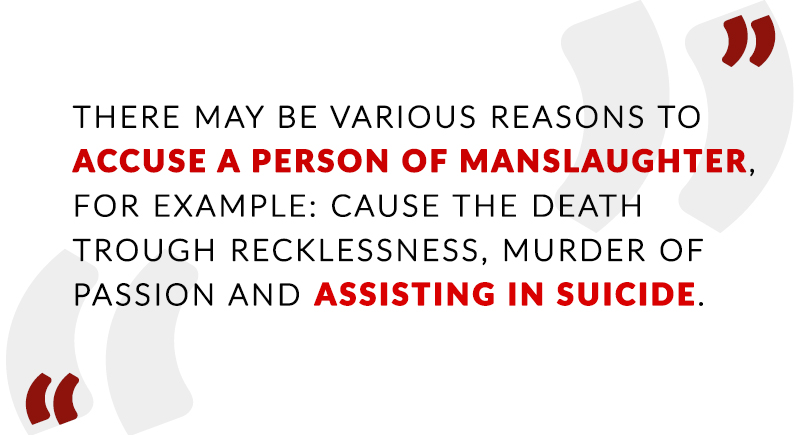 Facing manslaughter charges in New York State is incredibly serious, but you do not need to fight these charges on your own. Getting a reputable and experienced New York manslaughter lawyer at Sharova Law Firm, you can be sure we will do everything possible to get a favorable final outcome for your case.

There are many different kinds of manslaughter recognized by the New York State Penal Code and they have varied penalties, but all of them are considered severe and should only be taken on with an experienced and reputable manslaughter New York City lawyer.

Aggravated manslaughter in the second-degree is a C class felony in New York City and is punishable by a maximum of 15 years in prison with a minimum of one year. The elements of second-degree manslaughter are similar to the first-degree except that the person causing the death of another is unintentional. When dealing with felony charges of this magnitude you should hire a reputable manslaughter New York City lawyer to help you protect your rights and defend your freedom.

There are also charges related to manslaughter with the involvement of a vehicle. This is considered as vehicular manslaughter second-degree and first-degree depending on the elements in the act itself.

Vehicular manslaughter in the first-degree consist can be charged to a person if he or she is found to have been driving a vehicle with the blood alcohol content of 0.18% or higher, was operating a commercial vehicle that weighed at least 18,000 pounds of flammable gas, radioactive material, or explosives, or if they were operating an all-terrain vehicle or snowmobile in a historical park or recreational area while intoxicated. These all have to lead to the death of another individual to be charged with first-degree manslaughter. If you are arrested for this charge it is important that you do not try to talk your way out of this situation by explaining to the police or the prosecutor but instead request for a vehicular manslaughter New York City lawyer.

Top New York Law Firm Will Be Your Legal Shield

The more severe the crime you are accused of the more crucial it is to be confident that your freedom is in responsible hands. That simply means it is extremely important to call a seasoned manslaughter attorney as soon as you suspect you can be charged with that crime. Contact one of our law offices in New York, Edison, or Newark to get an expert consultation with our highly qualified violent crimes defense lawyer. Call Sharova Law Firm now and find out more about possible consequences of such charges and how our violent crimes attorney may help you to avoid or reduce them.

At the Law Office of Yelena Sharova P.C., we are ready to offer you accurate attention and the personal approach you deserve. Our top New York manslaughter lawyers are devoted to their clients’ success and will do their best to provide them appropriate results for the cases.

Qualified New York manslaughter attorney can apply various legal strategies to defend you from potential severe charges. The choice of the perfect defense strategy depends on specific circumstances of the case, but there are still some common strategies such as:

A criminal defense lawyer may not let the prosecutors operate their evidence if it was obtained in an unlawful way (for example, if your right to remain silence was violated or the evidence was found during an illegal search);

That means proving you were forced to kill the victim because the victim was threatening your life;

This strategy includes proving you are suffering from a mental illness and you were not understanding what you were doing as well as the possible consequences of it. This defense strategy demands an obligatory psychological treatment and sometimes time in a special medical institution;

This defense strategy requires special skills of your manslaughter defense lawyer to challenge the existing evidence and witnesses and to show there is an alternative explanation of the occurred situation that proves your innocence.

At Sharova Law Firm, out violent crimes attorneys possess the complex skills and knowledge to guide our clients throughout the most complicated manslaughter cases. No matter how severe your accusations seem to be, with our resources and devoting to your success, we are ready to take responsibility for the favorable final outcome for your manslaughter case.