Skilled New York Assault Attorney on Your Side

If you or someone of your nearest and dearest people is accused of assault, a paramount thing to do is to get a highly professional criminal defense lawyer to help you through the case. Your perfect assault attorney should be tempered in similar cases and focused strictly on your criminal defense. 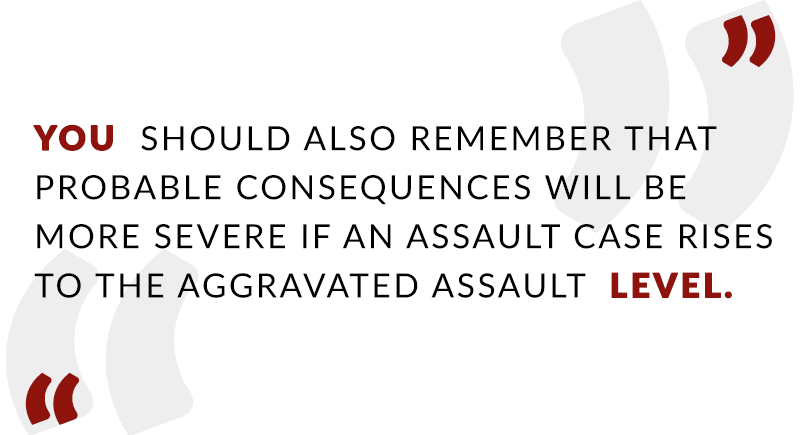 Assault Charge is Not a Joke!

Assault is a very serious crime that can influence your future life heavily since you have been accused. The indictment can result in huge fines, jail time, financial restitution, counseling, parole or probation, or entry on the criminal record. A lot of people think an assault charge is something that can be easily dealt with, but they do not realize that a simple assault charge may be transformed to felonious assault or even an assault with a weapon with a few simple circumstances.

Assault is one of the most common crimes including violence. Many people associate an assault with physical violence, but in fact, assault comprises more than just a physical attack. In some states, assault is defined as a physical contact when a defendant knows it may be provocative or insulting for another person. Threats to harm are also included to the assault statutes in some states. Assaults including less injury or fear level may lead to less harsh penalties because of the lower level of the assaults charges, but still demanding professional legal intervention.

Assault is trying to harm another person physically. There are various definitions of the assault crimes, but still, most jurisdictions include the threats of assault. That means a person risks being charged with assault even without any physical contact with a victim.

Facing a criminal assault charge, a lot of people think only of the immediate consequences, such as fees and jail time. Consequences for an assault charge can be truly serious. A defendant faces a risk of spending up to 15 years in prison for a class B felony assault. Assault charges sentences depend on the state law and also on the case circumstances. The offense seriousness and the criminal history of the offender also influence on the possible punishment. The first-time lawbreaker can seek for more leniency, the same time a person with broad criminal history record, as well as someone who repeated violent crimes instances, usually gets harsher penalties.

You should also remember that probable consequences will be more severe if an assault case rises to the aggravated assault level.

Though, assault charges can also provide a long-lasting effect on your future life. Sometimes, there are side punishment effects such as losing a job, reducing special employment opportunities, losing your driver’s license, and rights to have a firearm. For the person who is applying for citizenship, condemnation for assault is a reason to lose his or her chance for citizenship approval. There are some schools, universities, and companies that do not accept assault-convicted people for the job or study.

Professionals You Can Rely On

In Sharova Law Firm, we recognize how serious assault charges are. The NYC assault attorneys at the Sharova Law Firm have a great experience and a successful track record of defending clients against such allegations.

Let the professionals deal with such cases and provide efficient defense strategy to ensure you receive the best possible outcome.

Occasions for assault can be absolutely different: an incident on a road, a bar fight, dispute with your friend or a neighbor, a misunderstanding leading to a physical argument, violence at home, and many others.

There is a myriad of degrees one can be charged with, a skilled NYC assault attorney will be able to determine if the nature of the alleged crime fits the elements to substantiate the charge. Some of the degrees and their elements are as follows:

♦ Assault in the third degree – can be charged if you have the intent to cause physical injury to another individual and do so;

♦ Assault in the second degree – can be charged if you have the intent of causing damage to another individual with a dangerous weapon or instrument and follow through;

♦ Assault in the first-degree; can be charged if you have the intent to permanently harm, disfigure, or disable another person with the use of a dangerous instrument or weapon.

In contempt of all the circumstances of your assault charge, it is always a good idea to hire a seasoned attorney with an experience in defending assault cases similar to yours. Do not risk your freedom and your future – connect your NYC violent crimes attorney immediately as soon as you are charged.

The most often used way of defense is self-defense. In this case, a charged person accepts that he or she assaulted another person, but proves that he or she had a legal reason to do so.

Another defense strategy is mutual combat or consent. The main testimony for a mutual combat defense means, that both the defendant and a victim understood the possible risks before starting the altercation. An example can be a bar fight, which was started by a victim, but the defendant won. In such situation, the defendant’s strategy bases on the fact he or she did not provoke and start the fight, and another party entered willingly.

Hire an NYC assault attorney to choose the best defense for your case and to represent you in such critical matters. Assault attorneys at Sharova Law Firm are highly qualified and dedicated to their clients. We strive to deliver the high-quality client experience to everyone we meet and work with.