When it comes to harboring aliens it can be described as any action that meaningfully aids the ability of an alien to stay in the United States illegally. If a person once had the legal status of staying in America, once that status is lost and a person decides to help them stay in the country can be found guilty of harboring. If you think you or someone you know falls under this general description, do not hesitate to contact a defense attorney.

Harboring illegal immigrants have benefits economically for people, corporations, and underground organizations involved. The law that makes the harboring of aliens against the law is 8 U.S.C. Section 1324. There are laws against conspiracy to commit harboring an illegal alien as well as committing the act to completion. These laws are a part of the U.S. criminal immigration laws. 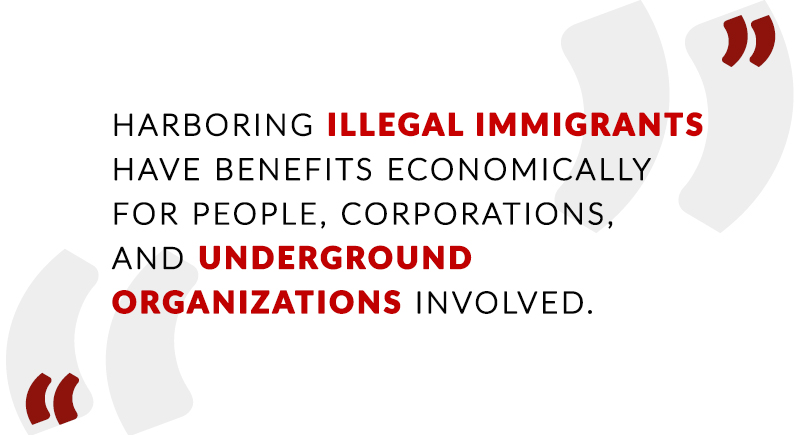 There are various activities that are prohibited under the United States of America immigration law, such as:

♦ Transporting or carrying illegal immigrants in the United States;

♦ Bringing immigrants in the United States, if they have no valid documents or permissions;

♦ Aiding or conspiracy in any of that crimes.

The defense attorneys at Sharova Law Firm are adept at handling the many criminal undertakings that are classified under the general charge of assisting illegal aliens. The defense attorneys at Sharova P.C. have dealt with cases involving employers, to people referring unlawful immigrants to employers who will hire them, to plain smuggling immigrants across the border.

One of the specialized areas of law the Law Office of Yelena Sharova P.C. works in is U.S. immigration. The many different experiences and expertise of the defense attorneys at Sharova Law Firm are all combined to consistently resolve immigration issues.

Our immigration crimes lawyers at the Law Office of Yelena Sharova P.C. are skilled and highly experienced in handling cases involving harboring illegal aliens into the United States. Our top New York criminal defense attorneys are efficient and aggressive enough when it comes to defending our clients in the court, and we know how to choose the most appropriate defense strategy that will ensure you the best possible final outcome of your case. Whenever you or someone you know is facing federal charges of harboring illegal immigrants, contact Sharova Law Firm immediately to schedule a confidential legal consultation.

There is a myriad of punishments someone can receive for hiring an illegal alien. Some penalties can include criminal and civil fines and loss of a business license. There are tiers to the fines, for example, first-time offenders can be fined $250-$2,000 per illegal employee. If someone is convicted of a second offense, the fine can range from $2,000-$5,000 per illegal employee. If an employer has a third offense they can be fined $3,000-$10,000 per employee. If it is considered a pattern of intentionally employing illegal aliens, then up to six months of incarceration can be imposed on the employer. Hiring an expert harboring an illegal alien lawyer is your first line of defense. Do not take charges such as these lightly even if you think you are innocent of any wrongdoing.

Harboring immigrants can land you in prison for up to 10 years. Anything over five years is associated with the financial gain of harboring the illegal immigrant instead of harboring with no economic gain, which holds a jail punishment of up to five years. Most times there are some viable defenses to help mitigate the punishments for these circumstances, but hiring an expert criminal harboring an illegal aliens lawyer should be your main priority.

Helping illegal aliens to avoid elicitation may seem as a good act, especially during that controversial fight on the reform of existing immigration laws in the United States. It is a serious federal crime, that may lead to extremely severe consequences and influence your future life.

If you are accused of harboring illegal aliens, you should do everything to protect your rights. That means trying to plead down your offense to a smaller one, that leads to lesser charges or to get full dismissing of all charges if it is possible.

Highly experienced immigration crimes attorneys at the Law Office of Yelena Sharova P.C. have a long history of successful legal representation in many cases involving such illegal immigration issues, as for example harboring. We are dedicated to our clients and we are ready to fight for their rights. With our vast experience and deep knowledge of federal and state laws, we can provide you efficient legal service you deserve.