Charged with DWAI-A/D in New York?

In New York, there is a criminal charge that is related to the impairment of both drugs and alcohol. The name of this charge is DWAI-A/D; it stands for driving when your ability is impaired due to alcohol/drugs. If it is determined that a driver is on any kind of drug and alcohol at the time of driving and it is deemed that the officer has ascertained that the driver’s ability to make sound judgments is impaired, they can then charge them with DWAI-A/D. 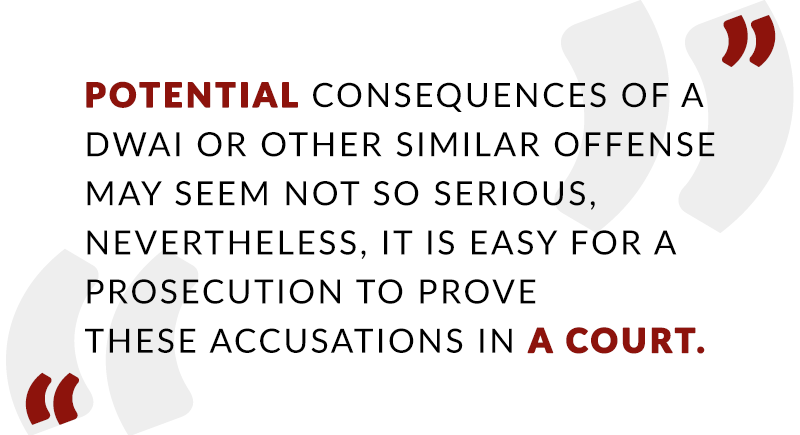 DWAI-A/D ( Driving While Ability Impaired with Alcohol and Drugs) means that a person had no right to drive a vehicle, because of her or his abilities to operate it safely were derogated by a combination of drugs and alcohol, even if there it was the smallest amount of them. This is the main factor that should be proven by a prosecution to charge you with DWAI.

Sometimes a DWAI charge is also simply an offense included in DUI. That means an individual can be charged with more than one misdeed if one of the delinquencies is included in another one. At the same time, it is impossible to accuse someone of both small offenses as well as a greater offense. First of all, it means someone who is charged with DUI can not face charges for DWAI in New York, but if he or she will be considered as innocent in DUI crime, it is still possible to charge that person with an included offense, such as, for example, DWAI.

Seasoned New York DWAI Lawyer Knows How to Help You

A DWAI may have less severe charges than a standard DUI or DWI but it should still be taken very earnestly. Potential penalties for DWAI in New York State involve harsh obligatory fines, a risk of spending time in prison, and to get your driver’s license suspended. If at the time of stop there was a minor in your vehicle, you are automatically facing felony charges. In any case, DWAI charges is a good reason to search for a skilled New York DWAI lawyer who will work hard to protect your interests and your rights.

If you are facing DWAI-A/D accusations in New York, Edison or Newark, contact the Law Office of Yelena Sharova P.C. to talk about your case. Our top DWAI attorneys have great experience in dealing with cases similar to yours, which means we understand all potential risks and will do our best to preserve your rights from being violated during a whole criminal process. Our New York criminal defense lawyers are dedicated to each of our clients, so you can fully rely on us when we say we will fight to get the outcome you need.

DWAI-A/D is a misdemeanor charge in New York State and it is a criminal charge that stays on your permanent record. The penalties for such a crime can be hefty and are worth taking seriously. Some penalties are huge fines and a mandatory New York State surcharge. A person’s license can be revoked for a minimum of 6 months. There are also prison terms of 30 days up to one year. Three years of probation is usually the minimum. An individual’s license can be suspended for 12 months to 18 months.

Details of possible punishments for an individual charged with DWAI-A/D also depend on the fact if it was a first-time offense, or the accused person already faced DWI or DUI charges before.

For the first time DWAI-A/D offense a person will get an obligatory fine of $500 to $1000, and his or her driver’s license will be stopped for minimum half a year. Rarely, but sometimes there is a risk to go to jail for a period up to a year.

Second-time DWAI-A/D charges bring bigger fines (of $1000 up to $5000) and loss of the driver’s license for a long time, a minimum term is a year. Possible time offender risks to spend in jail in such case is four years.

DWAI-A/D offense for the third time and more, threatens huge mandatory fine of $1000 to $5000, driver’s license loss for a period of minimum 18 months and very likely jail time of seven years.

Potential consequences of a DWAI or other similar offense may seem not so serious, nevertheless, it is easy for a prosecution to prove these accusations in a court. It is simple enough for them to prove you had a too large amount of drugs and alcohol in your blood to drive your vehicle. This area of DUI/DWI laws is incredibly gray because it is quite complicated to build a defense against concrete limits and simple suggestions.

Top New York DWAI lawyers at Sharova Law Firm realize how serious DWAI-A/D charges are, that is why we are trying our best to guard the rights of our clients in such issues. When you come to one of our law offices in New York, Edison, or Newark, you can be sure you will get a legal representation of the highest level from seasoned DUI/DWI attorneys with enough knowledge and skills to fight over charges you may be facing and ensure your safety.

It is important to take into consideration that not all DWAI-A/D New York Attorneys are equal. It is important that you retain one whose experience and track record shows success for their clients and are in good standing with any bar associations they are affiliated with. Doing your due diligence on a DWAI-A/D New York attorney can not only save you time and money but more importantly, it can save you and your family’s livelihood. Having a conviction of this nature on a person’s permanent record can have devastating effects on their life, anything from securing employment to living with a certain degree of shame for those that are looked upon as staples in their communities.

Do not take a chance with just any legal counsel, contact the DWAI-A/D New York attorneys at the Sharova Law Firm for assistance, they will guide you through the entire process and will do their best to get you a satisfactory outcome as they have for a vast majority of their clients. Do not hesitate to call the attorneys at the Sharova Law Firm today!