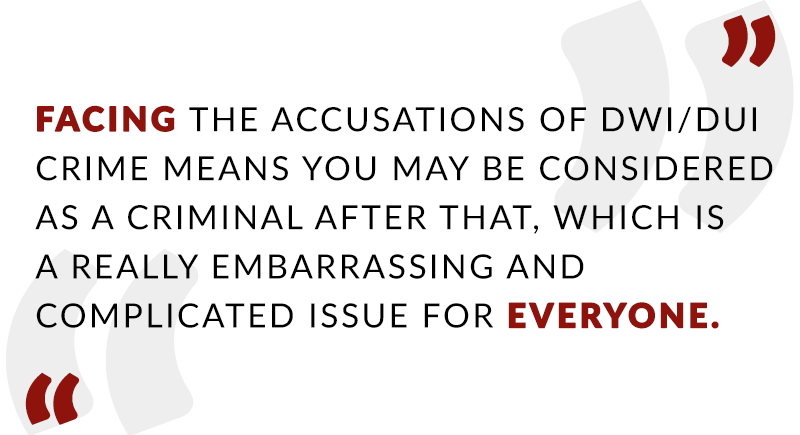 The state of New York has a renowned reputation regarding rigid offender DUI/DWI laws in the country. In fighting this type of case it is crucial that the lawyer you hire be exceptional on this issue. Threshold levels in Blood Alcohol Content are at .08%, but drivers in New York with a BAC level beyond .05% can also be punished. New York is known to analyze the offense of driving with a Blood Alcohol Content of .17% or above as an Aggravated DWI. Be sure to retain a highly skilled New York DUI lawyer will if you are charged with violating these thresholds.

In New York, your initial DWI/DUI is recorded as a misdemeanor. If you are convicted of one of them and then inside the subsequent decade are charged with another DWI/DUI, a class E-felony will be recorded. A skilled New York lawyer will be essential for the gravity of the alleged offense in this instance.

Driving under the influence of alcohol is a severe accusation. The New York City criminal lawyers at Yelena Sharova P.C. are cognizant of the high stakes for your automobile operating freedom as well as your individual status. Their DUI attorneys possess significant proficiency protecting clients successfully in courtrooms across New York. At Yelena Sharova P.C., their criminal lawyers have a winning history in DUI cases. This matter is urgent. Contact a New York DWI lawyer if you are charged with driving under the influence. Lacking expert aid from a New York DUI lawyer might possibly cause you to be incarcerated, be deprived of your freedom to drive, and pay a hefty fine.

At the New York City office of Yelena Sharova P.C., the DUI and DWI lawyers stand forcefully in their argument regarding DUI charges no matter the challenge. Certain justifications or precedence may well designate you to a suppression of evidence, dismissal of charges or diminish of crime, and/or punishment. Communicating to a skillful New York attorney is key when grasping your choices after being confronted with a DUI charge.

No one is able to predict the conclusion involving a legal event, however, our trained lawyers are some of the finest in the New York City area and are prepared to handle any DUI case. The offices of Yelena Sharova P.C. are a top provider of legal amenities in the New York City area, and they strive to give the finest client involvement as conceivable under any environment.

Once disputing an accusation of driving under the influence, demand that the lawyer you hired to be truthful with you regarding any detention, in addition to your options according to the law of the court. The New York City attorneys at Yelena Sharova P.C. have substantial understanding in the ensuing sections in a New York courtroom.

Being charged with driving under drugs or alcohol influence brings a risk to face serious consequences in future, such as prison time, probably fines, considerable growth of the rates for your insurance, cancelling of your driver’s license, and specific offender’s sign in your personal criminal record which will influence negatively on your house renting and employment in future.

Penalties for DWI/DUI criminal charges could consist of levies with or without time in prison. Penalties for driving while intoxicated may range from $125 up to $10,000. Prison sentences vary on the aggregate amounts of convictions of past misdemeanors and the quantity of time that has lapsed in between. Have the attorney argue what is considered admissible from your prior incidents. Imprisonment might last as long as two weeks to seven years. Moreover, as a result of a DUI/DWI conviction, being barred from utilizing your freedom to operate an automobile from 90 days to more than a year is a real possibility. Your license can be revoked for a period of 90 days to one year. The selection you make of a New York criminal defense lawyer will help determine the outcome between a prison sentence and freedom.

Facing the accusations of DWI/DUI crime means you may be considered as a criminal after that, which is a really embarrassing and complicated issue for everyone. You need a seasoned New York DUI/DWI lawyer who will explain what your case looks like and what perspectives you have, and who will handle you not as just another DUI or DWI case, but as a person with his/her rights and opportunities. At Sharova Law Firm we take care of every client because we realize every case is unique.

While being accused of DWI or DUI crime, both indicted person, as well as his or her friends and family members, are going through challenging times. These type of charges often ends in confusion and discomfort, and most of the defendants just dream about it ending as soon as possible. Anyway, you should not plead guilty just to get rid of the case. You have your rights that you need to preserve, so, first of all, you need to assure that your prosecutors are able to establish you are responsible for committing a crime.

At the New York offices of Yelena Sharova P.C., their DUI and DWI attorneys are knowledgeable as to remove restrictions on your driving abilities and help you attain full restoration regarding any New York driving honors you are eligible for. In many DUI cases, the office of Yelena Sharova P.C. and their DWI defense attorneys have won back licenses for many New York clients without any additional cost for clients.

The New York offices of Yelena Sharova P.C. have their lawyers learning the soundest plus maximum effective ways in defeating the state of New York’s scientific proof concerning DUI cases. Our attorneys are devoted to guiding you through the DUI process and attaining a normal and back on track life for you.

Hiring a DUI lawyer from Yelena Sharova P.C., you will get a sharp ready argument from somebody who distinguishes New York City DUI laws proficiently. Our DUI office and attorneys are dedicated to making the process as smooth as possible.