The difference between possession and distribution of controlled substances basically depends on the quantity of the illegal substance involved. There are also reasons why the police can additionally accuse you of intent to distribute, such as possessing any packaging materials, for example, plastic baggies or an unreasonable big amount of money.

Including the fact that being accused of controlled substances distribution can lead to large fines and life in jail, whenever you or someone close to you is charged with such activities, it is better to call the skilled drug distribution lawyer immediately.

The New York drug charges defense attorneys at the Law Office of Yelena Sharova P.C. are used to working with absolutely different and tough cases. When accused of such crimes, you need a criminal defense lawyer who understands a plea bargain is not the best possible action here because it can simply destroy your future. You need a lawyer who is able and willing to fight for your bright future in court.

Drug distribution charges usually include many additional crimes charges. If you are accused of it in New York State, you are risking to also face possession of controlled substances accusations, allegations of intent to deliver or sell it, and many other similar issues. Drug dealing is also associated with other criminal areas, such as assault, theft, or prostitution.

Some factors that can aggravate the heaviness of your drug distribution accusations are harming someone while distributing illegal substances, the kind of controlled substances you distribute, a lot of possessed drugs, accompanying crimes such as an assault or a theft, or special additional details of its distribution. 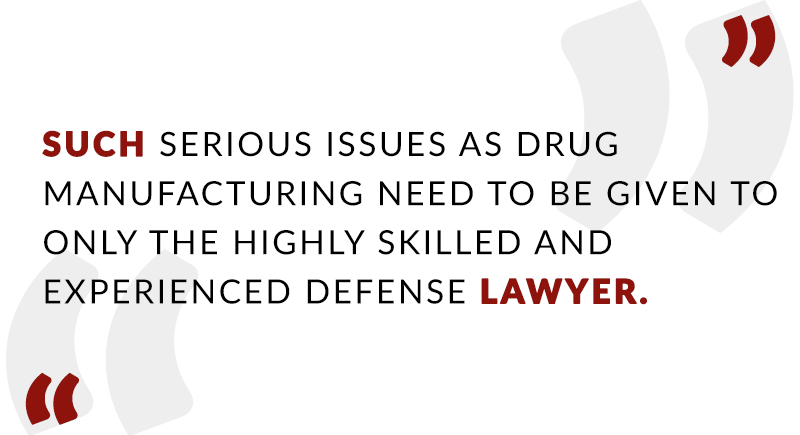 Facing any drug crimes charges is a great risk, so it is obligatory to find a top New York drug distribution attorney to start creating a solid defense strategy. The earlier you begin to plan your representation, the better chance of a greater outcome.

Or Accused of Drug Manufacturing?

Drug manufacturing includes fabricating of controlled substances in special places like laboratories or simply at home using necessary accommodations. Both state and federal law investigate such activities. When you are charged for taking part in drug manufacturing, you should react extremely urgently to leave yourself a chance to get through it. New York drug manufacturing lawyers at the Law Office of Yelena Sharova P.C. have already rescued a lot of clients from being charged with such severe crimes.

Such serious issues as drug manufacturing need to be given to only the highly skilled and experienced defense lawyer. The best possible course of action is providing an aggressive defense strategy that guarantees favorable results to the client. Our very first step will be a deep analysis of all the details of your unique case and then make a plan for the next actions.

Charges in drug producing crimes lead to extreme consequences, both straight and indirect, that will influence your life for the next couple years. Appropriate legal representation is one of the most important factors in your privileges protection. Top drug manufacturing attorneys have experience in handling successfully drug charges cases for more than 10 years, achieving winning verdicts as well as favorable sentences for our clients in New York, Newark, and Edison.

The state of New York has laws in place that criminalize the chemical manufacturing of controlled substances such as Crack/Cocaine, Crystal Meth, LSD, Ecstasy, or Heroin. The act of manufacturing is described as the preparation, synthesizing, and packaging of the controlled substance for sale. The laws are very complex and you will need a highly adept drug distribution-manufacturing lawyer to defend your rights and freedom.

The Law Office of Yelena Sharova P.C. ensures that their clients understand what is going on in their case and they treat every case unique even though the charge may be common to the courts. The drug manufacturing-distribution lawyers at Sharova P.C. will craft a superb defense strategy and are willing not to just settle for a plea agreement but are also willing and capable of tenaciously litigating your case if no other favorable alternative is reached.

Penalties for drug distribution-manufacturing charges vary depending on the actual circumstances surrounding the event and the defendant’s prior record. If a person is arrested for manufacturing of methamphetamine, they could be officially charged with a class b felony if the offense is in the first degree, the penalty can be up to 25 years of incarceration as well as a $30,000 fine. These penalties are life changing and are not to be taken lightly. You should retain legal counsel that has a successful track record in handling such cases; the drug distribution-manufacturing lawyers at the Law Office of Yelena Sharova P.C. are such lawyers.

There are other charges that can be brought about in a drug manufacturing-distribution case in the event there is no controlled substance found. Drug paraphernalia can constitute the possession of certain chemicals used in the processing of the drugs themselves as well as certain equipment. A qualified drug manufacturing-distribution lawyer will make the subtleties of this clear.

On a federal level drug manufacturing-distribution charges can hold a minimum fine of $250,000 and a maximum fine of $8,000,000, the time of imprisonment can be from three years to live in prison without the possibility of parole. Retain a proper drug manufacturing-distribution lawyer to make all the difference in the outcome you receive. Do not trust your life to some mediocre lawyer.

Your perfect NYC drug distribution and manufacturing lawyer should possess a number of important qualities such as:

An additional advantage will be if your criminal defense attorney has basic science backgrounds, for example, to make a toxicology or drug test report.