The best criminal defense strategy to guarantee your innocence

In the beginning, we want to assure you that with proper support and legal counsel you are able to get a positive settlement regardless of how serious your case is. You may not believe us, but an experienced lawyer could get the client from the very bottom even if the situation seems to be desperate.

The services of reckless endangerment attorneys of the Law Office of Yelena Sharova P. C. provide professional protection of our clients against unlawful or unjustified accusations, unlawful conviction, restriction of their rights and freedoms. In the situations when suspects are considered defendants until the transfer of cases to the courts —independent attempts to resolve situations may not bring positive results. We have extensive experience as reliable reckless endangerment lawyers in New York, thoroughly examine all the evidence, attract witnesses to the case, and perform any actions required by law for the success of our clients.

What does reckless endangerment mean

Now, to understand better what you are facing let’s get directly to the meaning of the issue. Reckless endangerment is a type of crime involving conduct that makes it illegal to act in a way that could produce the other person death or harm another person or put the property of others in danger. In case you acted in such a way you will face a reckless endangerment charge even if you do not, in fact, harm another person or damage property. It is enough to get charged if your actions were so reckless that you risked causing someone a significant physical injury or even death or damage to someone’s property. 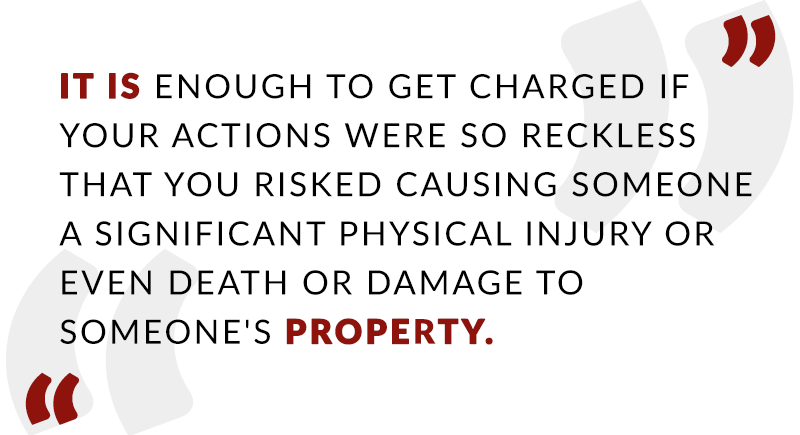 What are some acts that might cause reckless endangerment charges?

The following are some actions of everyday life that could lead to reckless endangerment charges if not performed in an appropriate way:

Reckless endangerment driving: misbehavior towards traffic laws and principles of safe driving is one of the main forms of criminal speeding and reckless driving. Construction projects: Disobedience towards safety rules at a construction site can cause the reckless endangerment charges Domestic issues: some types of child abuse include reckless endangerment, such as leaving a child without attention or allowing them to play with chemical substances. This is often known as child endangerment Hospital malpractice: this can sometimes also lead to criminal charges if a professional intentionally disregarded instructions or placed a patient in danger.

In the United States, three consecutive violations of the rules committed in front of a police officer are considered reckless endangerment driving.

Clear criteria that define the concept of reckless endangerment driving is really not clarified well. The only existing definition was given during the International Conference on Road Safety, held in Canada in 2003: “Driving behavior is aggressive if it deliberately leads to an increased risk of collision, either motivated by irritability, intolerance, hostility or saving time for the account of other road users.”

However, it is also rather vague, therefore, in different countries, the concepts of dangerous driving differ depending on local peculiarities and mentality. In addition to the generally accepted violations of traffic rules, the category of dangerous traffic usually includes overtaking on the right, driving on the side of the road, non-observance of marking lines and repeated change of lanes, abrupt maneuvers, non-observance of distance and even offensive gesticulation towards other drivers.

What is the charge of reckless endangerment?

The most understandable criteria for crime and methods of punishment for inadequate driving behavior are in many states in the United States, where three consecutive violations of rules in a row committed in front of a police officer are considered reckless endangerment. For example, speeding, inaccurate adapting to the road, and non-compliance with a safe distance. Such a complex violation is not only punishable by a fine in the amount of 500 to 2500 dollars but can also lead the driver to jail in case of a relapse. At the same time, the violator may lose the right to drive a vehicle for a period from one month to six months. Moreover, US law describes the concept of road rage, for which criminal penalties are also provided. You can get to prison for aggressive driving and outright rude behavior, including rude gestures, insults, and threats against other road users, as well as attempts to damage or teach someone using your own car.