Human trafficking, or “modern-day slavery”, is an extremely serious and frighteningly global crime. Increasing commitments of such crimes cause close attention from federal agencies and results in the adoption of new laws, much stricter than they were before.

Being accused of human trafficking is a very severe crime. These cases call for a knowledgeable attorney with investigative means and determination to aggressively litigate the case. The insinuations alone could be sufficient to derail a lifetime journey of reputation building. Allegations of the illegal movement of people, typically for the purposes of forced labor or commercial sexual exploitation in New York are taken extremely serious.

You are going to need an elite New York defense lawyer for this state of affairs. At the law firm Yelena Sharova P.C., our defense attorneys take a proactive approach in establishing your innocence prior to allegations of human trafficking being attached to you. If you so happen to be charged, the human trafficking defense lawyers of Sharova Law Firm will tenaciously pursue exoneration involving all allegations and charges.

Human Trafficking Is More Serious Than You Think

Human trafficking and their instances can be described as the smuggling of people, as the concealing or obtaining of people, the transmission or transport, by means of the threat or through the use of force or pressure. Also, this means defrauding a particular person or groups of people via the abuse of power or an arrangement that makes another vulnerable. This also includes obtaining profits or making disbursements that have control over another person, for the purpose of exploiting them. 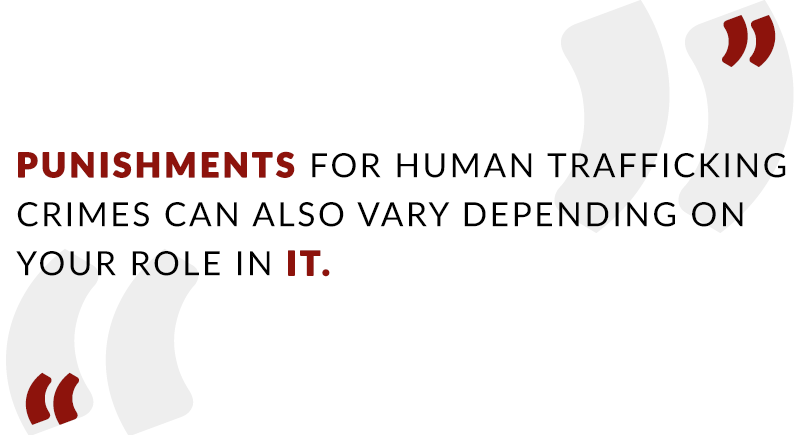 Manipulation incorporates, the corruption in the form of prostitution of others, forced labor or slavery, practices similar to slavery, and the abstraction of body parts. A New York human trafficking attorney has to be well grounded in such a complex and serious matter, you should choose carefully about who represents you in a case with such intricacies.

It is of high importance to retain proper counsel. A human trafficking criminal defense attorney needs to be aggressive and has the necessary background to defend their clients properly against a human trafficking conviction. These convictions have substantial prison sentences and large restitution cost to the sufferers. Allowed by federal law a human sex trafficker can get 15 years to life in prison. In New York State consequences for human trafficking for sexual purposes can reach as high as 25 years and $5,000 in fines. The punishment is high for the crime if children are involved.

Choice of a penalty for the offender is usually based on the age of all the victims and also on the purpose for which they were trafficked. If the case involved misconducts of the sexual character or any incidences of violence, penalties for that are harsher.

Punishments for human trafficking crimes can also vary depending on your role in it. For example, preparing a transport will result in prison time around seven years. Working on such transport (even without active participation) will lead to at least two years in jail.

Great Human Trafficking Attorney On Your Side

As events develop in the early phases, the lawyers at Sharova P.C. continuously develop a defense to strategically have the accusations discharged. Sometimes dismissal is not possible, but what the defense lawyers at Yelena Sharova P.C. can do for you is negotiate with the government’s attorney to minimize the charge centered on the specific dynamics of your case, in due course lessening the consequences.

When you are worried about a pending examination or have already been accused in a human trafficking case, contact the defense lawyers at Yelena Sharova P.C. and schedule a confidential consultation. All attorneys are not equal. An adept and aggressive criminal defense lawyer is the right blend of skills for a circumstance of this stature.

Immediately contact the Law Offices of Yelena Sharova P.C. and our criminal defense attorneys today if you have a human trafficking issue that needs resolving.