We know how to help you

Harassment is regarded as one of the heaviest misdemeanors in New York State. You can get up to four years of imprisonment for the harassment behavior. If you have been accused of harassment — do not panic. Everything has a way out. We would recommend hiring a New York harassment attorney as soon as possible since harassment crime is one of the trickiest charges.

Harassment: what is it?

Harassment is a deliberately unpleasant or annoying act, committed against the will of the person, causing her or him obvious inconvenience or expressed in an offensive, humiliating or another unacceptable form. 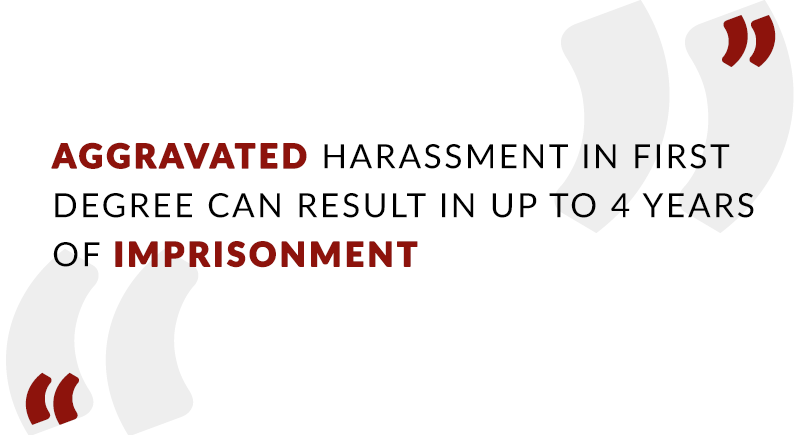 There are many other definitions of harassment, but the main features of this act must be:

Suppression of harassment behavior by a person in relation to whom harassment actions are performed.

The imposition of unlawful actions, the impossibility of their suppression by reasonable and generally accepted methods of communication between people (conversation, request, shout, demand).

Abusiveness, the inadmissibility of such behavior towards the person in respect of whom they are committed.

Responsibility and punishment for harassment

If a person uses a looking unintentional yet purposeful physical force to reach the desired action towards the victim, stalks him or her in public places and shows the annoying or alarming behavior in respect of someone, this is regarded as second-degree harassment. For accusation in second-degree harassment, you can get 15 days in jail as a maximum penalty.

If a person’s behavior ends up with a victim placed into a fear of physical injury, you risk to get up to 3 months of imprisonment and up to one-year probation as a sentence for the harassment in the first degree.

If a defendant while communicating with another person purposefully alarm and annoy him or her; if a defendant conducts such behavior towards a different person on the bases of their, color, race, nation, age, disability, religion, physical disability, sexual orientation or gender, it is regarded as Aggravated Harassment in second degree.

Also, if a defendant has been previously charged with harassment in the first degree second time in 10 years.

The penalty for Second-Degree Aggravated Harassment is up to one-year imprisonment and up to 3 years of probation.

If a defendant trying to annoy, alarm and threaten a victim on purpose on the bases of victim’s color, race, nation, age, disability, religion, physical disability, sexual orientation or gender; and the bases for accusation in First-Degree Aggravated Harassment also demands one of these actions:

damage or vandalism towards the religious property, for example, setting the cross on fire,  placing a swastika on someone’s property without the owner’s consent.

In addition, if a defendant has been accused of second-degree aggravated harassment twice in 10 years, he or she will be charged with First-Degree Aggravated Harassment.

Aggravated Harassment in first degree can result in up to 4 years of imprisonment.

Types and methods of harassment crime

Harassment can be committed in a variety of forms, depending on the characteristics of the behavior and the status of the victim, as well as the purpose of the wrongful act.

It is the perception of these actions by the victims that forms the basis for determining whether such actions are permissible with respect to him/her or not.

Some actions – for example, scabrous jokes or anecdotes with outright sexual overtones, “friendly” slapping or pinching in various places, etc. for one person it can be extremely unpleasant and look like an abusive and even a pretext to call a professional harassment lawyer, for another – this is the norm, the usual state of affairs and a simple joke.

Most often, with just the mention of the term “harassment,” each of us has persistent associations with the topic of sex, the relationship of the opposite sexes. 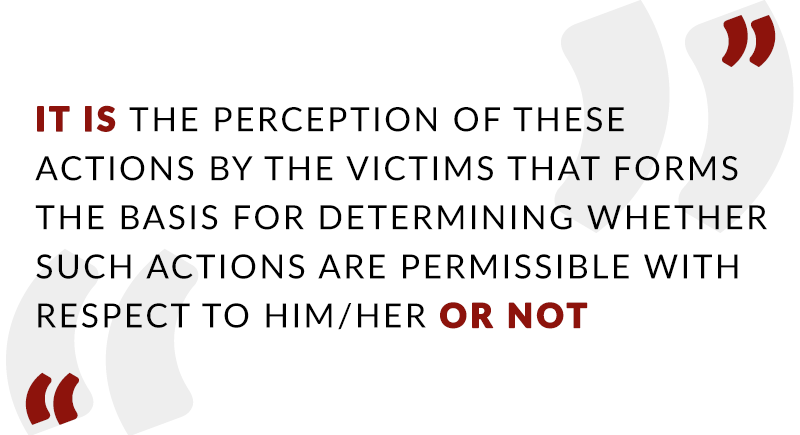 Sexual harassment refers to actions committed against the will of the victim and carrying obvious sexual connotations or a hint of intimacy: intrusive suggestions of sexual contact; going beyond the generally accepted norms of behavior in society and the relationship between two people (for example, close friends can allow much more than unfamiliar people), tingling, touching, stroking; greasy jokes, lustful conversations, and indecent stories told against the will of the listener; violent acts of sexual pleasure, etc.

Sexual harassment, especially committed towards minors, is the most dangerous and destructive for social behavior, being punishable in almost all civilized countries.

Sexual harassment can also be committed at work or in other circumstances when the victim is in a subordinate position to the attacker or depending on him or her.

Here are just a few examples of typical sexual harassment in different areas of life:

– Forced sexual harassment towards students, perpetrated by the teachers or professors in exchange for the absence of problems in studies;

– The demand for sexual contact from a person, accompanied by blackmail and threats of the spread of compromising or defamatory information in case of refusal;

– Harassment of a woman by their boss under the threat of dismissal or the creation of problems at work;

– An inclination to the intimacy of a woman (or even a man!), owing a large amount of money to their creditors, etc.,

– Talking on the topic of sex, vulgar messages and beyond the limits touches, made by an adult in respect of a minor of any sex.

Other types of harassment crime

Most often, such actions also carry sexual overtones and are committed as if by chance, yet on purpose.

Actions may be expressed in hugging or touching passengers of the opposite sex or minors in transport, passersby in a crowd, on an escalator, etc .; feeling the parts of the body, the touch to which strangers go beyond the limits of decency; be expressed in the form of attempts to  penetrate hands under clothes, etc.

To prove this kind of harassment, and, moreover, to bring it to justice in modern realities is not just difficult, but almost impossible.

Intrusive and against the will communication, stalking, deliberate and rigged meetings do not pose any threat, but deliver a lot of unpleasant emotions to the “victim”.

This can also include bothersome calls, when the attacker is silent, whispering rudeness into the phone or intimidates the victim.

Unfortunately, the police do not respond to such appeals, unless they contain direct death threats or signs of other crimes.