Sex crimes involving a child are considered the most heinous amongst crimes. There is no specific law under the New York Penal Code for child molestation, but there are many crimes listed that children can be victims of. Some of these crimes are forcible touching, sexual assault, sexual abuse, statutory rape, and public lewdness. To have participated in a sex crime, a person only has to take part in sex with a person under the appropriate age without the person’s consent.

If you have been accused of one of the above mentioned “children involving sexual crimes”, do not panic. That is true, the charge might be heavy. Yet, the way to limit accusation exists. Our qualified child molestation attorneys know how to plan your defence strategy that will save ypur freedom.

Sexual child molestation is considered as one of the worst crimes of all by prosecutors. If you are charged with such a heinous crime, prepare to be attacked brutally by the aggressive prosecutors, which means you definitely will need a heavy defense, ready to fight for your future life and your human rights.

New York Child Indecency Lawyers and New York Child Molestation Lawyers at Sharova Law Firm know what to do in such cases. We have vast experience in dealing with sex crimes charges involving children and provide legal service of high quality in our multiple offices in New York, Newark, and Edison. 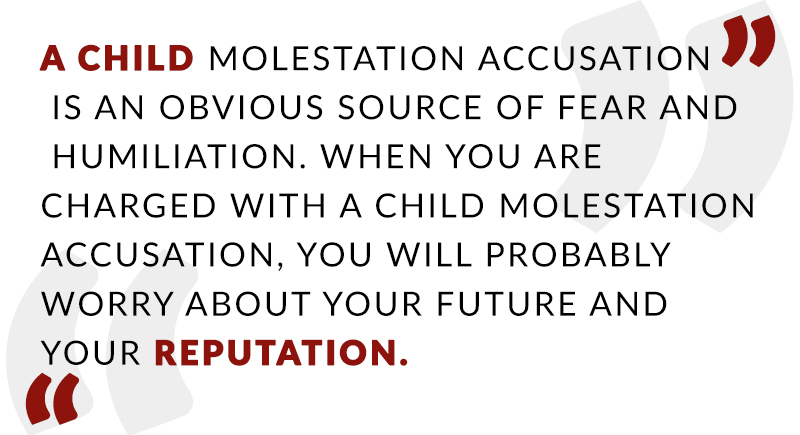 If a sex act happens with a child under the age of 17, the child does not possess the ability to consent to sex. If you have participated in a sex act with a minor and he or she has seemingly given their consent, you have now committed child molestation with the strong possibility of facing severe criminal charges.

Varying from state to state, child molestation and child indecency penalties are all harsh and long-termed. Starting from parole to prison time, child sex crimes are serious misdoes that cause serious consequences. In addition to social troubles and misinterpretations, there can be problems with finding a house or a normal job. Child sex crimes charges also require recording for a perpetrator.

If this is a first-time offense, a perpetrator can get leniency for his criminal case. A plea bargain is also often available only for first-time criminals. Further child molestation and child indecency crimes cause theoretically heavier penalties. 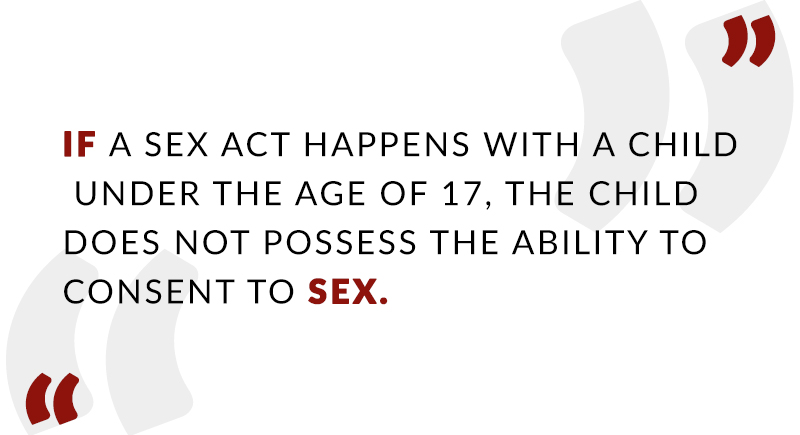 The punishments of being convicted of child molestation/indecency are spending multiple years in prison, having a criminal record, and being required to register as a sex offender for child indecency.

Some basics of the Sex Offender Registration Act, it requires convicted of sex crimes to register with the proper local authorities and give them information regarding your name, house address, online screen names, email addresses, and a photograph of yourself. This information is uploaded into a special database and you are obligated to update periodically as necessary. The Sex Offender Registration Act will require you to register for 20 years or for the rest of your life.

The Sex Offender Registry is a public open record which restricts places you can work or live in. It can be both state-lined or national; in the second situation, you will not escape the consequences of sex crime charges by simply moving to another state.

Sometimes there are also civil charges for these crimes, such as money fees for the victim or his or her family. They include medical costs, payouts for therapy, suffering costs, and any additional related costs.

The child molestation lawyers at Sharova P.C. know the statutory defenses that are mainly used in the case of child molestation/indecency accusations and charges. These two defenses are the Romeo and Juliet Defense and the Marriage Defense.

Romeo and Juliet Defense: This so-called defense of Romeo and Juliet is meant to shield individuals who are close in age ( the evidence difference is less than four years) from having to be convicted of particular sex crimes, even when one of them is a child.

Marriage Defense: This is applied when a person is legally married to the child and the charge’s basis is the lack of consent due to age, the marriage defense would come in to protect an individual from being convicted of child molestation charges.

There are also other child indecency defense strategies, such as false allegations (for example, during a divorce, one spouse can accuse falsely another one), mistaken identity (it is possible for a victim to misidentify the offender, if it was dark there or if he or she could not see everything clearly), lack of criminal intent (it could be just an accidental touch without any sexual desire), improper interviewing (sometimes victim does not say the whole truth for some reasons), insufficient evidence (evidence is not enough, the offender can get his or her child indecency charges reduced or dismissed). Appropriate New York sex crimes lawyer at Sharova Law Firm will help you to choose the best possible defense for your benefit.

The child molestation lawyers at the Law Office of Yelena Sharova P.C. are well experienced and treat every client with respect and fight tenaciously to protect the rights and livelihood of every client.

Accused of child molestation, what to do?

If the girl’s parents filed a complaint with the police on the fact of sexual intercourse, or other actions of a sexual nature with their child, then a pre-investigation check begins. Explanations of this fact are taken from the girl, after the interrogation of the victim, interrogations of the person against the petition are started. While there are a pre-investigation check and a criminal case has not yet been initiated, it is possible to achieve a refusal to initiate a criminal case under the New York Criminal Code. The pre-investigation check is a very good point in order the criminal case would have been broken and would not begin. Here you just need to immediately hire a criminal lawyer for sex crimes, as soon as your son (or any other person in sex crime attorney’s help) was called to give explanations.

But even if a criminal case was initiated, then the chance that the case would be suspended also remains, especially if the criminal case was initiated in fact, and not against a specific person. As a rule, a criminal case is initiated based on the fact. Therefore, in this situation, when an application under this article was filed regarding you or your son, then there can be only one advice here, immediately hire a criminal lawyer who specializes in sex crimes, you need a lot of work with the victim’s parents, a huge work with documents and applications that need to be prepared and compiled, interacting with the injured party.

P.S. Unfortunately, this problem has recently been encountered very often in our lives, it can happen not only with your son, but also with your daughter (the above example is the opposite, a girl is 18 years old, and a young man is 15 years old). So be careful, do not leave everything to chance, and ask for help from qualified professionals.