Top 3 Things to Avoid When You Divorce: Divorce mediation

Whatever the relationship between the almost former spouses would be, no matter how much they both want freedom, but the divorce process is stressful anyway. While dreaming that everything will end as soon as possible, you can make a lot of mistakes and lose more than you could with a competent approach. In this article, we will examine in detail a few common mistakes that are made during a divorce and how to avoid them.

Even if you are 1000% sure that you are right, not to consult a lawyer is too presumptuous. Court decisions are often far from expectations. In the divorce proceedings, the one who is better prepared always wins. For example, you know that property obtained before marriage is your personal and indivisible — this is an inheritance from your grandmother — an old house in the village. Over time, this village became part of the city, and real estate there increased in price. According to the law, all that is inherited — belongs solely to the person. But, if desired, the second spouse can prove in court that this property is joint. If during the period of marriage you made improvements to the inherent property  — this property becomes common. For example, wiring, plaster, gasification will be considered as solid grounds. 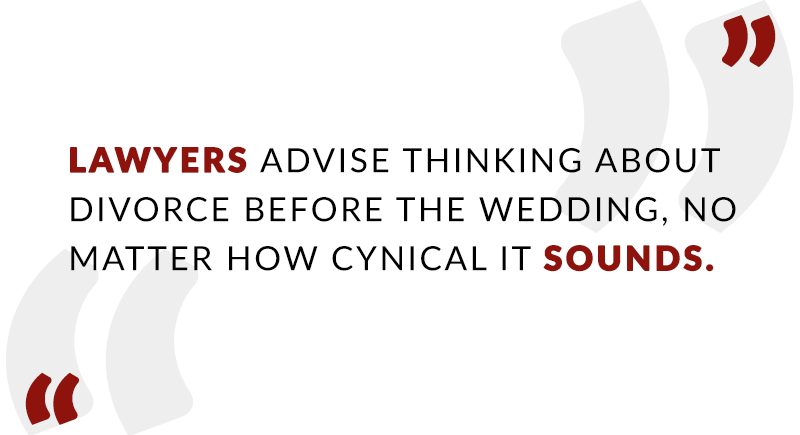 The task of a qualified lawyer is to prove that funds for improvements were spent exclusively by the client. This can be done through contracts with contractors, testimony, etc.

Property division mistakes: things to avoid when you divorce

All property acquired by the spouses during the marriage is considered jointly acquired and subject to division. Neither side will give up a larger share. Arguments can be different – minor children remain with one of the spouses, or one of the spouses has invested more funds in the purchase of a divisible property. In fact, even if the second spouse did not work during the entire period of marriage, it is rather difficult to prove in court the preferential right to movable or immovable property. To win to the maximum, a qualified lawyer will look for evidence that you invested the money that you had before the marriage.

The situation when the parents of one of the newlyweds gift the apartment to the spouses for the wedding is not easy. From a moral point of view, everything is simple – the second has no rights to it. But the moral in the divorce process is too rare. Therefore, lawyers advise thinking about divorce before the wedding, no matter how cynical it sounds. A wide gesture at the celebration “We give you an apartment” is a great surprise for the young spouses. But it is better to arrange it for your child before the official registration of marriage. Or, you can enter into a contract of donation. If parents donate money for an apartment, then the fact of the transfer must also be documented, and the contract drawn up by a professional.

There are situations when people decide to divorce, but for some reason, postpone an application to the court. They do not want to injure children, cannot agree on the division of common property or business, etc. Then, a situation arises, due to which one spouse moves to another city or even a country. No matter what friends you share, no matter how you participate financially in the life of each other and the children — if the divorce process does not have a logical conclusion, you shouldn’t trust the former spouse.

So, the application for divorce is filed by one of the spouses. Then spouses are summoned to the meeting, and if one of the spouses has not appeared 3 times,  divorce in absentia is possible. Now the question arises: where does the court send the subpoena? If the apartment is jointly owned or owned by the defendant before the marriage, he or she is unlikely to be discharged from it. Accordingly, the court sends the subpoena to the last known address – in this case, to the place of registration. Naturally, the spouse who filed for divorce will not say anything about this. And about your new status, you can find out a year later, when not only the court decision will come into force, but also debts on alimony will grow. Thus, you risk being left without property, but with debts. You will have to spend a lot of money on lawyers to annul the divorce and prove that the former spouse knew about your location, communicated regularly and received material support.

What to do to avoid it. If you’re going to move, find a lawyer you trust. It is worth re-registering for all your correspondence. In this way, you will not miss either the subpoenas, or bank documents, or any other important papers from state bodies. A lawyer authorized to act on your behalf will not only inform you about what is happening but will also take prompt measures to protect your interests.

Now you are familiar with the top things to avoid when you divorce. Hope, you will eliminate such mistakes. Good luck.

For any further questions ask our lawyers:

The title is more a joke than an advice, but depending on the statistics, around 25% of Presidents were lawyers.

How can you deal with the Emotional Death after a Divorce?

A divorce lawyer should be focused on your divorce case. Learn how it can help to deal with a divorce.

Do Cops Need a Warrant to Blood Test Me for DWI/DUI?

Refusing to take a Breathalyzer, prepare to be asked for a blood test. In this situation, cops will need a special warrant.

Aaron Hernandez a Free Man in Spirit, and an Innocent man by law

Aaron Hernandez, former NFL player, who was found guilty can go to his grave as a totally innocent by law.